War1gus is a re-implementation of “Warcraft: Orcs & Humans” that allows you to play Warcraft with the Stratagus engine. The game uses graphics and sounds from the original Warcraft, but improves the gameplay mechanisms with many modern conveniences that the Stratagus engine allows, such as modern mouse controls, named groups, larger group selection, more player factions in multiplayer games, a map editor, and multiple towns. This screenshot gives a feeling of what it is like: 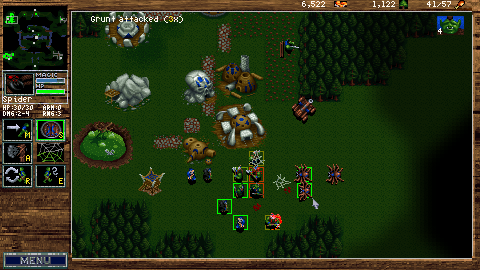 During the first start of War1gus you will be asked for a copy of the original Warcraft, so that the installer can extract the data. Both the DOS CD and Floppy versions should work. Extracting the data from demo, shareware, or the Mac OS versions is not fully supported at this time and the resulting data set will fail to launch.

War1gus is not an official Blizzard product, its a Stratagus and Warcraft modification, by Warcraft fans for Warcraft fans. You need a copy of the original Warcraft. Warcraft is a registered trademark of Blizzard Entertainment.

Check out what people made on those websites:

War1gus is an open source software. It is developed at